What is the difference between pairwise testing and … ?

Pairwise testing can be a more or less thorough kind of testing. The degree of thoroughness is usually given in degrees from 1 to 6 (for reasons that will be covered later!) So, for example, 3-wise (or 3-way) testing is more thorough than 2-wise (or 2-way) testing, which is more thorough than 1-wise (or 1-way) testing. The word pairwise (i.e. pair-wise) is really “2-wise” where the number 2 has been replaced with the word “pair” (for reasons that will also be covered later!). So, in fact, pairwise testing really only refers to the thoroughness of 2. Thus, the terms t-wise (or its equivalent t-way) was introduced as a more general term which does not refer to one particular thoroughness. The letter t is a placeholder for the thoroughness, which is usually 1-6. For example, 3-wise testing is t-wise testing with a thoroughness of 3.

The term all-pairs testing is simply equivalent to pairwise testing.

Mixed-strength testing is to mix, for example, 2-wise and 3-wise testing in the same round of testing. This will be covered later.

When should we apply pairwise testing?

Pairwise testing fits nicely into the testing phase of software or hardware development. It works well with agile development practices.

Is pairwise testing applicable to … ?

Pairwise testing is probably applicable to testing your software or hardware system, and it will probably exercise the system to such an extent that it will uncover bugs. There are, however, certain things it is less suited for. For example, performance testing and stress testing are testing problems that focus on other aspects than pairwise testing do. Pairwise testing is more focused on putting your system into varied situations, which is simple different than loading the system with work.

Having a domain expert make tests for a software or hardware system is valuable and highly recommended. Pairwise testing is not a replacement for this kind of testing but complementary to it. Pairwise testing will put the software or hardware system into varied situations and is sure to explore other paths than those most familiar to a domain expert.

Many testing techniques work well for testing smaller software or hardware systems, but become too heavy-weight and cumbersome for the larger cases.

From a user’s point of view, pairwise testing is light-weight and simple to apply to even the larger cases.

From the pairwise tool developer’s point of view, however, pairwise testing involves some heavy-weight computations. This was until the last few years a bottleneck in the application of pairwise testing to the larger real-life cases, but in recent years effective algorithms for pairwise testing has been invented and are now available in commercial products.

What skills are needed to do pairwise testing?

And the operating system to use is given as:

And the constraints between the values are given as:

This is the basic complexity level of telling a pairwise testing tool how to make tests for your system. Of course, testing an actual website requires more than just which operating system to use and which browser to use, but if those three lines made sense to you, then you can use a pairwise testing tool to generate tests for a piece of software or hardware you understand.

How effective is pairwise testing at finding bugs?

For testing highly critical software of hardware, pairwise testing is a good start, but other quality assurance techniques should be used in addition.

Telling a Pairwise Testing Tool what to Test

To understand what is meant by a model, consider this example: When testing the aerodynamics of a car or a plane, a small model of the car or the plane is made. For example like these: 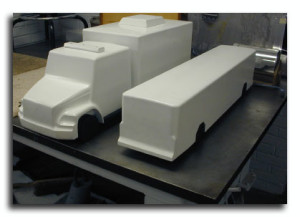 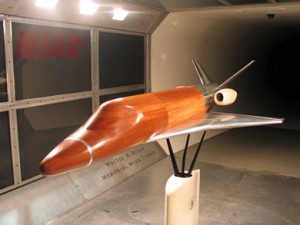 Usually when ordering a car you are given a form with a lot of options: Which transmission, which engine, which color, which extras etc. Writing out the options, their alternatives and their relationships is in fact a model of one aspect of the car. This model can be given to a pairwise testing tool and pairwise testing is well suited for testing that aspect of a car.

Based on that model, the pairwise testing tool will generate a set of filled-out forms. If each resulting car is tested, the confidence that any configuration will in fact work is strengthened. It is also likely that doing such testing will uncover a faulty interaction between some two options that a customer might select.

(If you want to look at completely worked-out models for pairwise testing right now, check out Example 1 and Example 2.)

A product line is some software or hardware that can be customized by the producer to fit a customers need. For example, a car can be configured with different engines, transmissions and extra equipment. A piece of software can be delivered with many kinds of plugins and extensions activated.

Pairwise testing is well-suited for testing that different combinations of customization will work.

Software or hardware might also be configured by the customers after it has been delivered. In this case, all parts of the hardware or software must be delivered to the customer for him er her to configure.

Pairwise testing is well-suited for testing that the different configurations the customers chose will work.

Software must typically coexist and interact with many other software systems. To add to this complexity, software is usually evolving with new versions being delivered regularly. Some software systems might even run in as many different kinds of environments as there are customers. A website will most likely run in 10 versions of 10 different browsers with a multitude of browser extensions running and the whole package being installed on 5 versions of 8 different operating systems. Some of the browsers might be configured with 200 different settings such as security and privacy settings, window sizes and color configurations.

Pairwise testing is well-suited for testing that software will run in the customer’s software environment.

Many kinds of software and hardware takes the user through a series of screens that allow the user to select a multitude of options. For example, checkouts of a e-commerce websites, wizards and forms.

Pairwise testing is well-suited for testing that different paths through a work-flow will work.

Most software is organized internally as functions, methods, classes and modules. They usually exist in complex environments and should be used in a certain sequence.

Pairwise testing is well-suited for testing that functions, methods, classes and modules work in varied environments and that different flows of usage works.

Notice that these do not include the expected result. A pairwise testing tool does not figure out by itself what the correct result is. There are, however, some general things we can say. For a website, we can say that for each test, the website should look similar to the way it looks on the developer’s machine. Or, we might say that some software or hardware should finish each test without crashing. Or, we might say that a car should complete a certain set of trials with some measurements within certain thresholds.

When we have the pairwise test, we have basically two options: We can either run the tests manually or import them into an automated testing setup.

For example, these are the first three test cases of a pairwise test suite for a website as test scripts:

– Get a Desktop in front of you with Windows.
– In the network options, make sure IPv4 will be used.
– Set network connection to cable and make sure it is connected.
– On the desktop machine, set system language to english.
– Open Chrome.
– Set window size to wide and large.
– Open URL “https://inductive.no/pairwiser”.
– Check that everything looks good.

– Get a Mobile in front of you with Android.
– In the network options, make sure IPv4 will be used.
– Set network connection to wifi and make sure it is connected.
– On the mobile phone, set system language to english.
– Open Chrome.
– Set window size to tall and small.
– Open URL “https://inductive.no/pairwiser”.
– Check that everything looks good.

– Get a Mobile in front of you with iOS.
– In the network options, make sure IPv6 will be used.
– Set network connection to edge and make sure it is connected.
– On the mobile phone, set system language to non-english.
– Open Opera.
– Set window size to wide and small.
– Open URL “http://inductive.no/pairwiser”.
– Check that everything looks good.

Here we can see a special syntax for including the specific values for each test case. “|testnr|” is replaced with the current test number. “|Device|” is replaced by Mobile or Desktop depending on which value is in the test.

If we are running the pairwise tests automatically, we need to import them into a testing tool and set up the expected results.

The three sides of the triangle are a, b and c. This generates the following array:

The fourth entry in each element is the expected value. We need to write those in manually and wrap the tests in an array that our testing system can use.

The testing system can, for example, put the three sides as input to the function under test and check the return value against the expected value.

The pairwise tests are now fully automated and can be run again and again.

We have already covered the degree of 2, the classic 2-wise or pair-wise tests. A pairwise test suite with a thoroughness of 2 includes each 2 (or pair) of values in at least one of the test cases.

There are other degrees of thoroughness. Let us look at them in more detail.

However, we do talk about the thoroughness of 1. This is a special case where each value of each parameter is included once in at least one test. This is a useful first-level of testing, but is not strictly speaking combinatorial testing nor does it test the interaction between the values.

For each added degree of thoroughness, the number of tests is roughly multiplied by some factor. If there are 10 2-wise test, then there might be 40 3-wise tests and 160 4-wise test etc.

For example, whether a website is transported with IPv4 or IPv6 will not cause any rendering problems. Still, you do want to test that the website works on both IPv4 and IPv6. Therefore you might set the thoroughness of the parameter IP version to 1 even though the other parameters are set to 2. This means that all pairs of all other parameter values will be covered, but not together with the IP version values. This will decrease the number of tests without causing it to detect less bugs.

Continuing the website example, a similar argument can be used for three other parameters: Rendering the website might not work correctly on Internet Explorer when JavaScript minification is enabled and CSS minification is enabled. The interaction between rendering and the two types of minification is likely to cause a problem, so the thoroughness of these three is set to 3. This will ensure that any combination of these three is included in at least one test case without including all triplets of all other parameters. Thus, we increase the number of tests a little, while increasing the bug-detected capabilities a lot.

In this context we might actually talk about a thoroughness of 0, meaning that any value of a particular parameter will do for a test case and we do not care which.

A pairwise test suite might contain, for example, 30 test cases. The accumulated coverage after each test case has been added will typically form a curve like this: 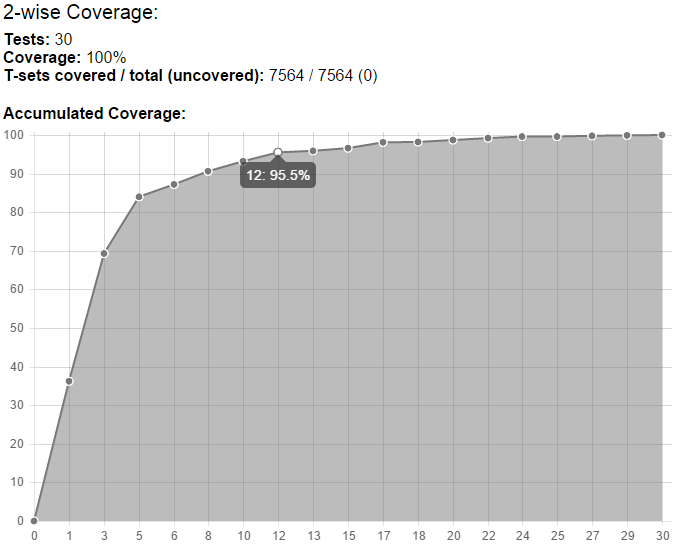 In ordinary pairwise test generation, the pairs included (pseudo-)randomly, meaning that any faulty pair is most likely to be included early in the test suite. Thus, a partial test suite of, for example, 95% can be expected to detect 95% of the bugs that a complete pairwise test suite would find.

Knowledge Base Articles
From the Pairwiser Blog
Go to Top